Recently I went to live up a mountain in southern Spain for over two weeks.
On the full moon I thought it good to raise my frequency instead of speaking to too many fluffies so I did a silent fast for a day – the easiest way to quickly heighten awareness for sure.


I was starting to spin up when I came across a large crystal and went to uncover it. In the process I half destroyed a giant ant colony living within the crystal.


The colony got together and without worrying or playing the victim,  in unison they started to build a new colony, with the main goal being the protection and moving of the eggs and larvae – looking after the next generation and future.  They did this in harmony with the local natural environment too.


I felt a little bad so I gave them my last juicy apple that was planned for the following morning, and sat down to enter “ant consciousness.”


The larger ants then sent all of the younger ants to the apple and then continued to look after the next generation and future in unity.  I became aware that humans are more stupid than ants, at present our environment in under attack and we don’t currently see the adult and stronger of our species looking to the next generation.  No ants were arguing, none were consuming things they did not need – there was no ego – just how best to live in unison in harmony with nature. 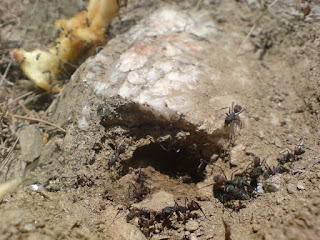 Many humans think they look to the next generation by sending their children to school, but the education chapter in wayki may shed some light on the truths of this “group think” train. Clue: teachers only deliver a curriculum they have no say in.


I then realised humans can actually think forward more than one generation, and even plan for multiple generations time.  Even the top sci-fi writers such as Alastair Reynolds and Dan Simmons cover millions of years of generations in a single 4 hour read.  This is a level of consciousness the ants do not have but they still have it all pretty much sorted more than us humans do.  Ants DO have free will too, watch one and you will realise this, they don’t have to protect the next generation or the future, they could go for a walk, but they deem this important in their teeny tiny brains they house in their alien style heads.


Why is this the way?


I sat on the rock pondering this as my apple was becoming a joyous all day festival for the teenage ants.
IT is because the corporate and media beasts mold consciousness that is open to be molded by being in a “conform state.”


Let me explain more deeply; Out of hundreds of examples I could give I ask you to watch this, it shows a latest gadget made solely for profit. Millions are currently wishing for or purchasing one, and all it does is keep you locked into the current ME, WHAT I AM DOING. MY WORLD, EGO.

This device along with almost everything else the corps and media push at us forbids any thought about generations to come or the environment and the “group think train” is overpacked with….well, sheep.


Talking of corps, a couple of  mountains along from my tipi Pepsico has purchased much of the mountain and collects all of the natural springs and sells the water  bottled for profit.
How fucking far has our species fallen when a group of people take over an endless spring of pure water and then sell it to get rich.  I tried to telepathically tell the ants about this but they did not seem to respond…..to busy caring about the next generation.

Coming back online it was not hard to see that the oil spill in the gulf is either a) an inside job, or b) a natural tectonic plate shift and then covered up by the elitist BP (who of course took part in this weeks bilderberg meeting in Barcelona).
There is for sure a media black out on the truth in the gulf.

and these two links help paint the picture too (see 2 blogs ago for more information).
link1   link2


And as for the mind control victim who shot up some people in Cumbria, we can see some of the hallmarks in the following information (see wayki wayki for more info on how probably ALL of these shootings come from MKUltra mind control).


This whole event has been engineered and staged managed by “The Powers That Be”…..they are getting the public to focus on this negative event to subconsciously programme them with the vibration frequencies of occult meanings behind these numbers. They are deliberately attaching negative energy to vibrational frequencies to suppress it in our subconscious minds, vibrationally this throws us out of balance and lowers our vibration frequency which lowers our conscious awareness in the 3rd dimension of duality……..la la la.

The world cup starts this week, and i find it hard to disagree with anything Matt Delooze states here, but with the worlds consciousness focused upon the corporate event, it may be a good place for the powers that be to create an event around the quarters or semis.  Its strange how a golden phi spiral follows near many stadiums all the way to the stadium where the final is held…..coincidence?  You decide.


P.S. Since the original writing of this article, I have realised that the ant eggs may actually be “slave ants” and then therefore would be more akin to the current human consciousness after all.