After just watching a couple of world cup games I think I have it worked out….bear with me, and note this is aimed mainly at “England fans”  …though the word “fan” and what that actually means is another article unto itself.


People are giving their emotional energy and complete hope based upon nothing of any substance.   All the hype around the England team is all about making money – the pundits make money, the advertisers, the newspapers, the beer in the shops in world cup packs –  it is all about money and how to sell things based upon a built-up image.  The more emotional energy invested, the more they have you.  The wanting public buy into it as the day to day life in England is so grim people will look for any straw to clutch.


The world cup smoke mirror illusion circus reminds me of this amazing award winning animation (read between the lines).

The actual players have image rights, agents, and are earning 60k-120k a week and do nothing for the planet or species progress or improvement, yet they are idolised.  England cannot do well because they have no cohesion, and it does not matter how many good individual parts you have – without cohesion it wont work.
Try and build an engine out of mercedes, bmw, and ferrari parts – it wont work.
Also, the England players are for most of the year tribally separated with allot of energy, it is near impossible to erode those energy divides and create a cohesive egg.  Other teams have players playing in different countries so meet up as friends, but in England’s case they are at war the whole year then are expected to gel in a couple of weeks – energy does not allow this, it is a law of our reality.

Now lets look at the “wanting” public, what is it they actually want?   They want to feel good – to have faith in hope repayed.   They want to see some heart, but most do not actually know why a football team winning against another will fill these holes in their lives. 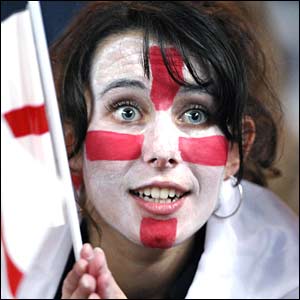 Feeling good and having faith in hope repayed ALL invested on something external is stupid is it not?  Surely?  Especially when it is all a lie and a circus based upon taking your money?
It is all the reptilian part of the brain anyway – my tribe is better than your tribe, all the tribes watched our tribe be the best, your tribe sucked.  This is not bad, its ok, but its extremely primal and the vibrating frequency is not too high.


I see kids mind controlled by their parents to shout “come on England” and paint their faces – wow, the child is not even explained what this is all about or why this is being done – this is mainly because the father is a Sun reader and the mother just wants an easy life and to be allowed to watch some celebrity tosh next week.

Now the main crux of this article Is that our species is REALLY NOT AT A STAGE where it can spend over £1b on stadia for entertainment when we really have more pressing problems to deal with (food and water issues).


When we have the basics sorted, like clean water, pure seeds, and a little more harmony then we can start going crazy on global entertainment – we are not there yet, not by a long way.
Even micro managing down, hundreds of millions are spent in SA right next to poverty areas. Just who is going to use these stadiums afterwards?   drumroll…..no-one.


Imagine some aliens plonked along – and they saw the current economy crashes, earthquake increases, the suns electromagnetics playing up, the control of the planets power by a few hundred people, mind control, theological lies, poverty, toxic food, and hunger.
And then they saw spaceships (satellites) beaming to BILLIONS of the species a game of entertainment that was based upon separation and money.   Just how fucking stupid would it look to them?


I’m over it, it’s all a bit too wrong, and each team is a fractal of its nation showing that England is grey, egoistic, dire, and predictable.  If a miracle happens and England did win the tournament I wouldn’t be any happier as it is a LOW VIBRATORY source of happiness, and ALL the people involved are extremely poor role models.   Blow your plastic trumpets sheep…..isn’t it funny how the noise is similar to BAAAAAAaaaa.